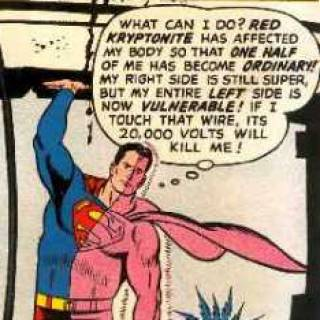 One day idea shared with me in the Lothlorien chat group is the idea that Singaporeans are like Kryptonians who are constantly under the Red Sun.
This idea originally came from Superman comics. It is known that the Green Kryptonite can kill Superman, but Red Kryptonite can render him powerless and ordinary. Before Krypton was destroyed, the entire planet existed under the Red Sun, so Kryptonians are just ordinary people on their home planet. When Krypton was about to be destroyed, Superman's scientist parents sent him to Earth where he came under the influence of the Earth's Yellow Sun which gave him godlike powers.

There are two useful applications of this theory :

The original idea was a comment about just how brutal our education system is. Even when I was cramming for a 3-year Law School programme, I realised that somehow, my daughter has to study almost as much as I do. And it's always CL2. My daughter even had to maintain a diary with drawings during the last holidays. The questions posed in primary is already quite difficult and this has caused a buildup of a very profitable tuition sector for ex-teachers.

As a child of the 80s, I can attest to how my fellow Singaporeans had such a good time when studying in Australia. An Australian does not have the same pressures as a Singaporean, if they are not academically inclined, they can do very well as a miner. Even their minimum wages were one of the highest in the world. Singaporeans who come back from Australian universities always developed a more exuberant personality while abroad, whereas those who stayed put always lose a bit of their individuality back home. Some even go batshit insane studying in a pressure cooker like NUS.

This is why I doubt that Singaporeans will choose to Lie Flat and pull out of society. Why not emigrate to Australia where you, too, can become an academic Kal-El?

Interestingly, no parent has considered the geo-arbitrage possibility where they save up the fees that should have gone into a tuition centre into an Australian degree.

I leave someone else to do the maths.

This Singapore Red Sun idea can also be applied to personal finances. Because of frugal roots, we find that Singaporeans save 20% off their take-home pay in our CPF. Beyond that, savings into REITs and blue-chips do not attract capital gains and dividends taxes. This means that most Singaporeans with about 10 years of working experience in Singapore would have accumulated more assets beyond most Westerners in the same income band.

If a Singaporean emigrates to another country, he can pull out all his savings and should comfortably be able to buy up landed property and a car in another country. As savings were accumulated tax-free, it is theoretically possible to pull put an investment in a foreign country and begin to supplement your income with dividends from day one, and this time your CPF money would be fully under your control.

The only weakness is that you'll be paying more punishing taxes in your new home.

If any Singaporean wishes to move to a Westernised country, based on the work my students have done, they need to supplement their lifestyle with some work, but it can be very chill and relaxed compared to Singapore. But if the Singaporean moves to another country in Asia, retirement is definitely possible on $500,000 SGD.

I think as we celebrate National Day this week, we should appreciate the fact that we've grown to be disciplined people that can turn our personal struggles to be something meaningful. If anything, networks of ex-Singaporeans have sprouted up in many overseas countries allowing us to have a taste of what it's like to live and play away from the Kryptonian Red Sun.

I will stay because my investment income has already broken free from the gravity on Planet Singapore.

But the question for readers is this :

Will you stay or will you go?