The Great Sexual Recession of 2019 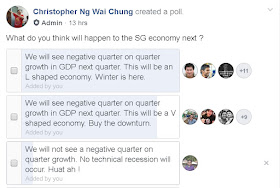 Singapore's GDP had a nasty Q2. quarter to quarter it shrank 3.4% surprising many economists. The effect of this result prompted a survey on my ERM alumni who, generally speaking, have a lot more skin in the investment game than the general public. You can see the choices in the poll above, but as it stands, my students believe that a deep L shaped recession is a slightly higher probability than a shallow V shaped recession.

Actually, I do not share the same sentiment as my students.

My take is closer to DPM Heng - the next recession will occur but it would be a very short-lived V shaped recovery and a good time to accumulate more equities.

However, to have a concentrated population of aggressive investors vote on an L-shaped recovery can be disturbing. One of the consequences of believing in this prediction is a flight to bonds to avoid the more serious parts of the downturn.

The other is that society needs to cope with a Sexual Recession.

A Sexual Recession coming on the heels of an Economic Recession is an almost forgone conclusion.

In 2007, blue-collar men in the US retreated from dating world to play computer games like Skyrim, never emerged, and declared that they lead happy lives in surveys done on their Life Satisfaction.

(This blog has a lot of fans who identify as BBFA and see this lifestyle as a good thing.)

The knock on effects on the economy will be drastic but possibly invisible.  You can read about how difficult it is to detect Singapore recluses here.

Later marriages, when it happens, will feature a permanently low fertility rate. Men who delay marriage will marry women who have lower fertility. This will drive families towards smaller homes. Car sales of 7-seaters will decrease and knock on effects will hit the education and discretionary consumption sectors further down the road.

At this stage, I am not too sure whether society can come up with a solution here.

The most effective solution is to keep having a lot of jobs and a booming economy. Singapore is ahead of Europe in many ways. My suggested solution is to fast track permanent residency for foreign spouses in Singapore to deal with the labor crunch to stimulate more businesses at the same time.

Imagine an ITE graduate who earns $2,500 a month. He ranks below the median income in Singapore because median salaries here are pegged at $4,400. Let's be realistic here : How is he going to get a wife when local women put such a large premium on economic resources in Singapore ?

The average wage in Bangkok is 25,500 Baht or about $1,100 SGD per month. In fact, lawyer wages in Kuala Lumpur is only $56,000 MYR a year or $1,550 SGD a month. So if a foreign spouse marries a Singaporean ITE graduate, she would be marrying someone who earns more than a lawyer back home.

Same applies to Singapore women. I know a lot of Singapore women who may be perceived as ball-breakers by Singapore men but are "exotic and full of personality" to expat men.

Singapore needs to be both a global financial and marriage hub to survive the Great Sexual Recession of 2019.

If you wish to read about the sexual recession, you can following this link.