What is the best possible response towards Elitism ?

We can find Orang Asli in Malaysia, but in Singapore, there are plenty of Orang Atas.

Coming in a little late in the game, I noticed that a fire-storm has been brewing because a blogger called Intellectual Snob has managed to offend the sensibilities of Singaporeans worldwide. ( http://theintellectualsnob.blogspot.com/ )

Well it does not really matter that this so-called snob has been exposed as an NTU undergrad. What matters is that snobbery and elitism is very real in Singapore and no amount of finger pointing at government scholarships will change humanity's tendency to benchmark themselves and build hierarchies to dominate others. Wallstreet in New York will always have their big-swinging dicks, the French have their Enarchs so it comes as no surprise that Singapore will have it's elite group of Mandarin scholars.

If you think being riled by a blog is bad, I can imagine that many readers may have snobs within the family. An aunt of mine, until recently married to a pretty big shot in Singapore, made a Freudian slip during a karaoke session and declared her children a different "kettle of fish" from us inferior cousins. That's part of Singapore living, my mum tapped rubber for a living when she was 14 and now her sister has given birth to a different "kettle of fish". ( My mum had a big argument with me today over this article, I agreed to present the facts more accurately, she actually started tapping rubber at the age of 14 )

As an engineer, I want to focus on Elitism and what we can do about it, rather than parcel out blame on Singapore society, here's how I think we can react to this:

a) Understand that its inherent in human beings to strive towards superiority.

Striving for superiority is likely to be an evolutionary adaptation. Our ancestors had to look good to attract a mate. Males needed to hoard food and and hunt to attract females. Needless to say, we evolved to become a pretty competitive species on this Earth.

b) Do not dehumanise a group of people based on the actions of a few bad hats.

No matter what you face at work or at home, there will be good scholars and civil servants that work hard to sustain their families. We fail and lose out on a great friendship if we lump them along with the Wee Shu Mins in Singapore society. Give folks the benefit of the doubt and act only when your self-esteem comes under direct assault and don't heap scorn unnecessarily.

c) Build up your self-esteem in this harsh society.

The Singapore education system focuses less on self-esteem and more on skills excellence. No wonder graduates from an American-style of education are louder and more confident if only at first glance. With this realisation, we have to adopt the policy of setting small goals and succeeding in them to bolster our own self-confidence. We have to read widely and understand the weaknesses of our own education systems and supplement them. MIT has released their lectures to the world at large so there's no excuse for not being able to get a top flight education.

d) Find areas where you can excel in

You don't have to limit your success in academics just because the government chooses scholars based on this criteria. You can excel at building great relationships, spiritual attainment, superior craftsmanship or even by getting the best loot on World of Warcraft. The key is to enjoy the journey and when doing something you like, try to get into a state of Flow and be immersed in your work.

Okay, I'm a finance writer, what else can you expect? Financial independence is not a state of being wealthy, it simply means generating enough investment income to cover basic living expenses. When this state is achieved, you begin to make peace with your ambitions. You become more effective dealing with people because you strive to get your objectives met and not to simply cover your ass at work.

I'm sure many readers will be able to come up with better ideas on how we cope with elitism and the pain of dealing with the so-called Elites.

Do enlighten this small Frog graduate from NUS and share your ideas with all.
Christopher Ng Wai Chung at 9:06 PM 4 comments:
Share

Word Cloud for Sowing the Seeds of Prosperity

Well here's what the word cloud for my third book looks like courtesy of the www.wordle.net website.
Christopher Ng Wai Chung at 9:57 PM No comments:
Share

Cover Page of Sowing Your Seeds of Prosperity 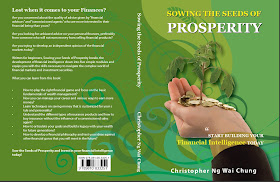 After much thought about keeping the prices of my book affordable and lowering the break-even rate, I have attempted to give myself some lessons on cover design. Here are the results of weeks of back-breaking effort.
Christopher Ng Wai Chung at 11:10 PM 1 comment:
Share
‹
›
Home
View web version